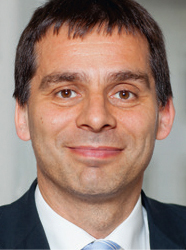 Peter Umundum (born 1964) earned a degree in informatics and technical mathematics and started his professional career in 1988 when he joined Steirerbrau AG, where he headed the software development department as well as the organization and information department. He left the company in 1994 to join Styria Medien AG, where we became the managing director of its subsidiary Media Consult Austria GmbH after only two years.

In 2005, he joined Austrian Post as an executive in the letter mail division, where he was responsible for production and logistics as well as national and international investments. On 1st April 2011, Peter Umundum has been appointed Member of the Board, responsible for Parcel & Logistics. In addition, Peter Umundum took over the chairmanship of the Supervisory Board of the European transport network EURODIS.